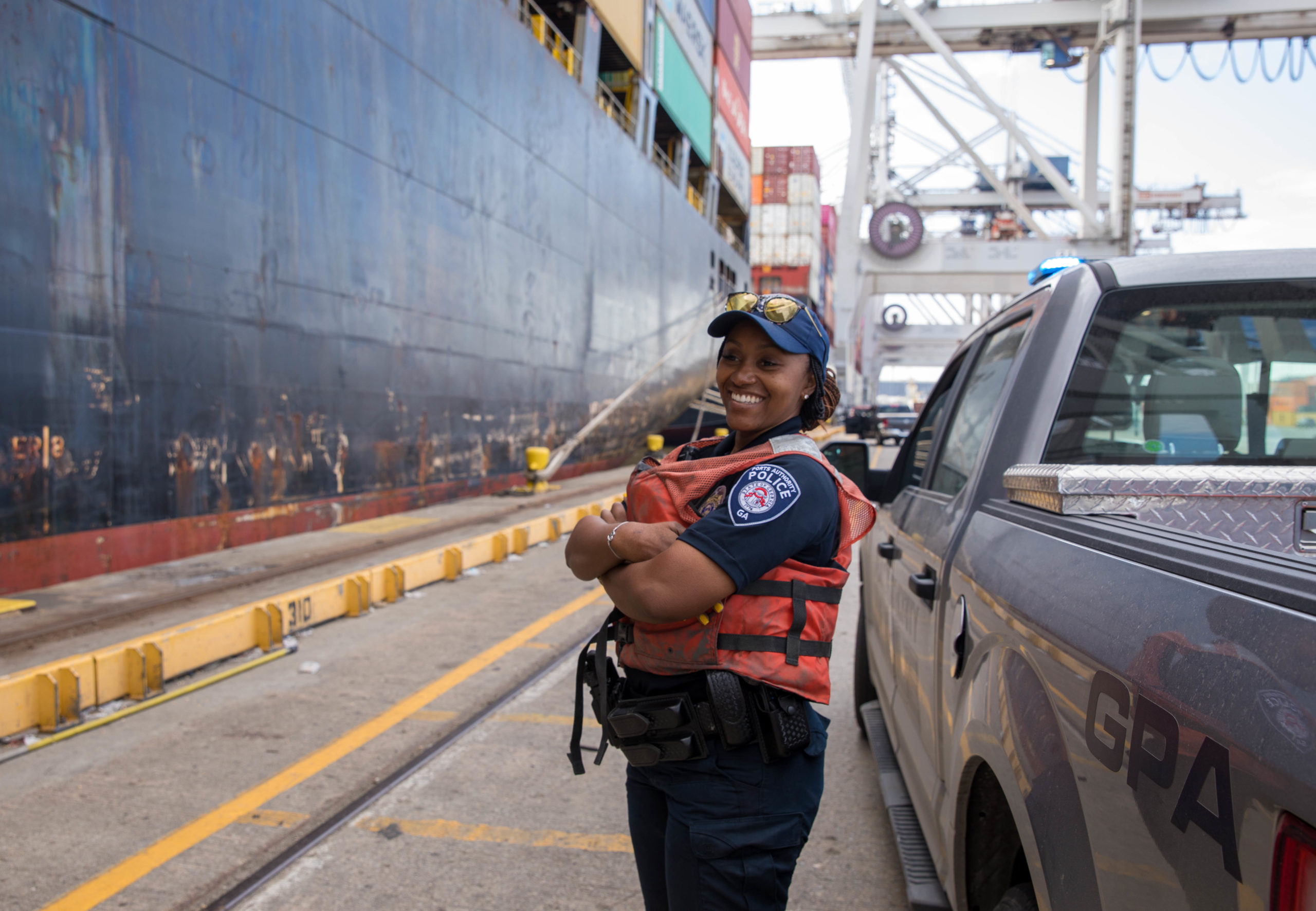 On a sunny April afternoon, Port Police Officer Ashley Griffin walks the length of the docks at Garden City Terminal to make sure no damage was incurred following the 9 a.m. departure of the Northern Magnitude.

“It’s a great way to get all your steps in,” Griffin said as she leaned over the dock’s edge to inspect every rubber fender and chain positioned along the ship’s previous location.

As the dock patrol officer for the day, it’s Griffin’s job to make sure there’s no suspicious activity along the sprawling 10,000 feet of dock comprising Garden City’s berths. Her duties also include pre-inspection before vessel arrival and post-inspection following departure to make sure everything is intact.

Once the Magnitude clears a row of ship-to-shore cranes, Griffin clicks her radio microphone.

“6 Alpha!” she calls out to dispatch to file her first report of the day at Berth 3. The code indicates no damage was found, and Griffin places the report in a binder. Today is a busy one at the nation’s single largest terminal and Griffin heads directly to her next assignment — the sailing of the 1,300-foot long CMA CGM Columbia from Berth 8.

Griffin, who joined the GPA’s Port Police department in July 2021, said she applied for the position during a job fair held last year. After recruiters learned she was a sworn officer, her application process was expedited.

“The first day I came across the Highway 25 overpass to work, I was so thankful,” Griffin said. “It definitely changed some things in my life.”

After previously considering a career as an attorney, Griffin decided to pursue law enforcement because she loves helping people and making a difference. Public service was part of her upbringing since her mother was a recruiter for the United State Air Force and her father served in the U.S. Army.

Griffin said the comradery of the department makes it stand out and the most enjoyable part of her job is the family-oriented environment.

“Since we see the same people every day, we’ve really become like family,” Griffin said. “We love each other, laugh together and keep everyone updated on our kids.”

As she continued patrol while awaiting the afternoon arrival of the Evergreen Ever Faith, Griffin keeps a watchful eye along her route. She slows her GPA vehicle when approaching a container stack to make sure a truck driver was wearing proper personal protective equipment. (He was).

Even though she’s been with GPA for nearly a year, Griffin said she’s still amazed by the coordination of so many moving pieces.

“I’m still just wowed by everything,” Griffin said. “It’s like the terminal is its own separate world.”

As the Columbia pushes away from the dock, Griffin keeps her vehicle moving as jockey trucks continuously transport containers to and from the six vessels still moored at Garden City. She’ll continue this close supervision through 6 p.m. before overseeing the arrival of the CSCL Sydney back at Berth 3.

Port Police officers must not only make sure the docks are safe but are also responsible for securing GPA’s buildings and the perimeters of all facilities. Garden City Terminal is a federally regulated and restricted area that serves as a border entry point. The duties performed by GPA’s Police Department are part of a broader homeland security mission to protect the maritime transportation system and safeguard Georgia’s infrastructure. GPA officers work collaboratively with state, federal and local law enforcement partners to accomplish this mission.

A daily meeting updates officers on any overnight incidents or pressing security alerts such as elevated United States Maritime Administration (MARAD) warnings. Officer Bryan Gerber heads out on patrol after the 5:45 a.m. briefing.

Along the perimeter of Garden City Terminal, Officer Bryan Gerber starts his patrol by checking all the gates surrounding the property. Perimeter patrol officers constantly assess the facility’s fence line and makes sure no unauthorized persons attempt to enter GPA property. One thing Gerber notices on patrol is his positive interactions with hundreds of people who work in and around Garden City Terminal.

“Everybody seems so happy to be here,” Gerber said. “About 95 percent of the people coming through the gates have something positive to say.”

Gerber, who grew up in Wisconsin, joined the military after graduating high school. He took part in live-fire exercises all over the world, including Panama, Jordan, Germany, and California. Eventually his military career led him to Fort Stewart. From there, he joined the Savannah Police Department. Gerber spent nearly 30 years with the city before joining the GPA department in September 2020. “I didn’t know how many jobs are available with the ports,” he said.

While continuing his patrol, Gerber keeps watch for anything out of the ordinary. On this day, that includes moving a deer carcass blocking truck traffic and clearing debris near the Mason Mega Rail Terminal.

Although the size of Garden City Terminal was daunting at first, Gerber said it seems to shrink as time passes. However, Gerber said he notices something different every week.

Gerber said his duties often take an unexpected turn, such as the time he took a ride on the spreader bar of ship-to-shore crane to inspect the hull of a container vessel. The unique workplace has also changed his perspective.

“I get to look at sunrises every day coming up over the cranes,” Gerber said. “I really take joy in the little things now.”