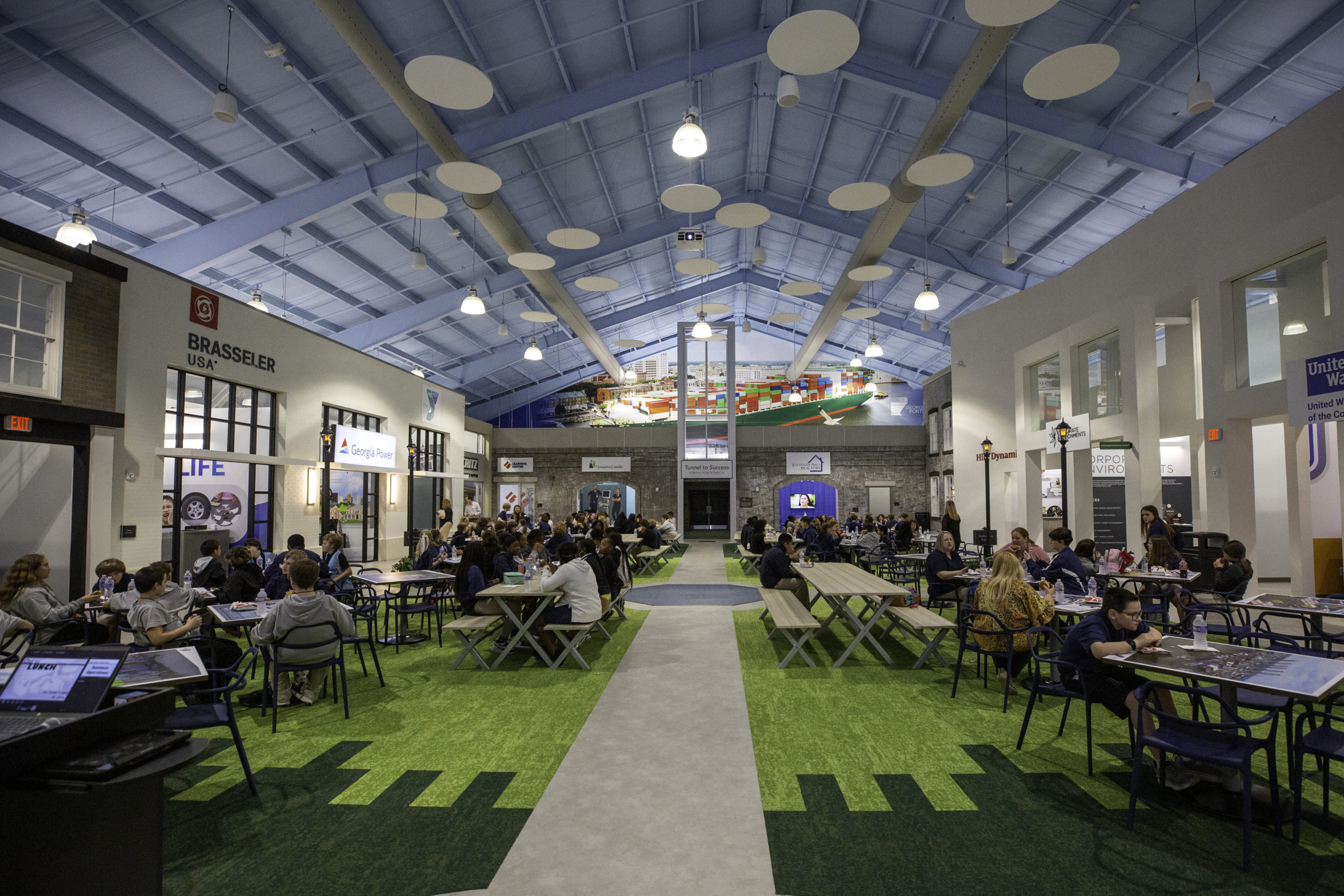 On a recent Tuesday morning, dozens of sixth-grade students from Effingham Middle School stood outside scaled down versions of local businesses. They shouted slogans and held signs to entice their peers to stop by and pick up their wares.

“Come get your pineapple pins!” one group called excitedly from the TLC Tourism storefront. The St. Joseph Candler team advertised the best hand sanitizer while students at the Publix space were offering drawstring backpacks.

While not a usual day in the classroom, these business simulations are an everyday occurrence at the new JA Colonial Group Discovery Center. The 25,000 square-foot facility on Georgia Southern’s Armstrong campus offers an immersive world that provides a greater understanding of fiscal literacy, builds 21st century jobs skills and fosters an entrepreneurial spirit.

Kyle Redner, director of development for Junior Achievement of Georgia, said the curriculum was designed to align with Georgia’s standards of excellence.

“Our in-class curriculum provides 20 lessons and culminates in this real-world experience,” Redner said.

The center, which opened in February, has already had 4,000 students participate in its JA Biztown and JA Finance Park programs this semester. JA Biztown, which is aimed at sixth-grade students, tasks students with fueling a business for the day and gives them a look at what it’s like to be a member of society. The space features a town square mimicking the squares found in downtown Savannah and is surrounded by 18 miniature business storefronts.

The curriculum for JA Finance Park is geared toward seventh graders and dives deeper into real-life scenarios. In this program, students are assigned a salary, credit score, and even hypothetical children. They must learn to stay within a budget amid rising prices for everyday needs such as grocery store runs and vehicle maintenance.

Susan L. Doyle, a South Effingham Middle teacher, said the programs give students the opportunity to work with others and teaches them how to run a small business. Doyle has seen students put the lessons into action including one young man who is reselling items on Amazon Marketplace for a profit.

Companies sponsoring the spaces at the center were given the option to customize their storefront. Some, like EnMarket, included graphics of their iconic slushie machines and popular snacks while others such as Critz BMW showcase a working bright blue Isetta. Coincidentally, the car is the same model driven by the Steve Urkel character in the sitcom “Family Matters.”

JA BizTown also includes other necessities its citizens may need such as St. Joseph Candler Hospital, Georgia Power, and area banks. All students can vote, and everyone must pay taxes at BizTown’s City Hall. Purchases in JA BizTown are made using a unique QR code.

Redner said prior to visiting the center, students must fill out resumes and apply for jobs at one of JA BizTown’s tenants. The class also votes on a mayor for the day who runs City Council meetings and oversees the town. The town is even patrolled by public safety officers who can issue fines for “speeders” who choose to run while within city limits.

Sixth-grader Gage was employed as Georgia United Credit Union’s chief financial officer for the day. He said the skills taught in the simulation were preparing him for the real world.

“We’re learning to use money safely and wisely,” Gage said. “I’m also learning that if you don’t have the money, you shouldn’t take out loans or use credit cards.”

Simulation Manager Laura McDaniel said activity at the center has been a whirlwind since the doors opened. McDaniel provides instruction to the participating students, called citizens of JA BizTown and JA Finance Park.

On this day, McDaniel was encouraging students to shout out familiar brand slogans and commercial jingles. In addition to managing a budget and pricing products, teams are also tasked with creating a marketing plan. Many of the groups wrote slogans on dry erase boards touting the commercial appeal of their products.

The center’s staff is augmented by Georgia Southern students who are Dulany Waters Leadership Scholars. Intern Leviticus Collins said he’s elaborated on topics such as the stock market, Roth IRAs and 401Ks during training sessions for Finance Park.

“Hopefully some of the students will go far in life and continue their enthusiasm for business,” Collins said. “Financial literacy and business ethics are the key to a bright future.”

Many students were already realizing the importance of a sound financial foundation. Matalyn was acting CFO for the Thomas & Hutton JA BizTown location.

“I think the program is definitely worth it,” Matalyn said. “I didn’t know much about finances other than being the banker in Monopoly. This is a lot different!”

The center has so far included students from Savannah/Chatham, Effingham, and Evans districts as well as several private schools including Bethesda, Savannah Christian, and Savannah Classical. Students from Bryan, Bulloch, Wayne and Liberty counties are set to participate in the next school year. Roughly 15,000 students are expected to visit the center annually.

“In today’s world, most of our students do not have a tangible experience with billing/invoicing as families utilize online resources,” she said.

The Armstrong location is one of five JA Discovery Centers in Georgia. JA of Georgia aims to prepare young people for the global economy and help them build a better future for themselves and their community.

“I’ve never had a job where I walk out and something good happens every day,” McDaniel said. “I have that here.”