For Charles Wallace, a network support analyst at Georgia Ports, learning to serve others was something instilled in him from an early age.

Wallace’s father started what would become Faith Deliverance Apostolic Ministries in the family’s living room in 1990. Soon, the congregation outgrew that space and moved into the Wallaces’ garage while they were building a permanent home on Wendell Street in Savannah.

When Wallace moved back to Savannah from Statesboro and joined the GPA’s Information Technology department in 2007, he wanted to make a difference in the community. He said community outreach is the cornerstone of his faith. 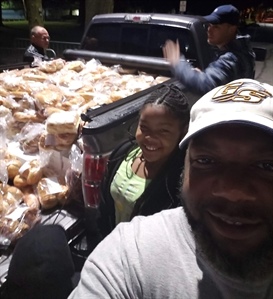 “As Christians, we’re supposed to be there for the community,” Wallace said. “We need to show love for those who may need a helping hand.”

Wallace has a heart for young people and has spent the last 12 years giving them a head start in life. This passion has led Wallace to spearhead a youth conference, hosted by Faith Deliverance every spring.

Each conference has a central theme, with this year’s theme being “Mind Games.” Wallace said the goal is to get young people to have a focused way of thinking, and not distracted by negativity. Several classes will coincide with this theme, with one on Friday night and the other two on Saturday morning.

The conference kicks off at 7:30 p.m. April 26 with speaker Anthony Johnson from AKJ Ministries in Hinesville, Ga. The first Saturday session begins at 10 a.m. and will be taught by Roeshone Scott, a risk management technician at GPA. That class will encourage attendees to make the right choices. Wallace is then teaching a second session on basic financial principles.

Wallace is well equipped for wiring others for success, whether on the job or in the community. As a network support analyst, Wallace’s daily responsibilities at the GPA include troubleshooting network issues, overseeing the wireless network, keeping computer and laptop inventory, and remotely installing software. When volunteering, he strives to help youths reach their potential.

“If they start off on the right foot, then they have a better chance of being successful,” Wallace said. “That way, they won’t have a mess to clean up when they become adults.” In previous years, the conference would end with a concert featuring choirs composed of Wallace’s group of 40 young people and other groups from the Southeast. Wallace said a group from Tampa, Fla., join them every year.

This year’s event will be capped off with a community cookout, which kicks off after the conclusion of Saturday classes. Wallace said everyone in the community is invited. The event will feature games, inflatables and giveaways. Wallace said the Savannah Fire Department also usually brings a fire truck.

When not on the job, Wallace and his group also positively impact the community through various events throughout the year. On the first Saturday of each month, the group visits the Riverview Health & Rehabilitation Center. In addition to words of encouragement, the group also hands out socks and blankets.

During the holiday season, the group visits the Old Savannah City Mission to serve dinner and distribute gifts including socks, blankets and other essentials.

For Wallace, helping others in just second nature.