Set to open in October 2018, the Appalachian Regional Port will create a new gateway to the Port of Savannah, opening additional markets in Alabama, Tennessee, while avoiding 8 million truck miles annually.

The 42-acre site near Chatsworth will be operated by Georgia Ports Authority and served by CSX. The rail terminal will provide a direct, 388-mile route to Garden City Terminal. By reducing transit costs, the ARP will make locally produced goods such as carpet, flooring, automobiles and tires more competitive on the global market.

The ARP is part of the “Network Georgia” program designed to create inland terminals throughout the state to reduce intermodal truck traffic and provide greater rail capacity to the Southeast.

Featuring easy access to I-75 and US 411, the ARP offers an efficient option to an all-truck dray to the Port of Savannah. Each container moved via the ARP will offset 355 truck miles on Georgia highways. This will also yield important benefits to air quality and highway maintenance. The facility will handle import, export and domestic cargo.

Through improved access to low-cost rail and a ready source of empty containers, inland terminals serve as magnets for industry, offering important opportunities for economic development. This model allows exports to be trucked for shorter distances and staged at the intermodal yard, where they are loaded onto trains moving hundreds of containers in a single trip. 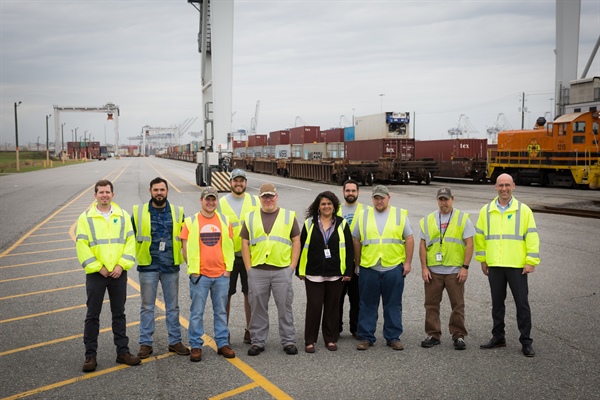 The ARP is also expected to bring a broad array of jobs to the area, from advanced manufacturing and logistics, to the retail and support services necessary to supply new industries and their employees. Wesley Barrell, Terminal Manager of the ARP, said it was always essential for GPA to hire applicants locally to invest in the Chatsworth community. “GPA is committed to establishing a presence in Murray County and moving GPA’s gates closer to our customers,” Barrell said.

Barrell acknowledged the cooperation and support GPA has received from the community.  Port officials have worked closely with the Murray County Chamber of Commerce, which hosted ARP interviews.

The ARP team, all hailing from Northwest Georgia, arrived at Garden City Terminal in January for a six-month training period. Several of the new employees live within miles of the facility and have closely monitored its progress.

Juli Byington, Operations Administrative Coordinator, has been excitedly watching the ARP develop and is ready to step into her new role. “It’s very exciting and there’s so much to learn,” Byington said.

Her teammates shared her excitement about returning home and getting the ARP up and running.

Jesus Aguilar, Equipment Operator, was used to operating heavy equipment, but on a much smaller scale.  “It’s amazing watching the movements on terminal,” Aguilar said. “There’s so much going on, but it’s still so coordinated.”

Assistant Manager Drew Hayes was enticed by the opportunity to grow with the terminal. “I was really interested in getting involved with the ARP, starting from the ground up,” he said.

Barrell says this environmental stewardship will also be a vital component of the ARP. The facility will be using three electric rubber-tired gantry cranes and lower emission trucks. These eRTGs will reduce fuel consumption by more than 95 percent per crane.

The eRTGs are scheduled to start arriving in April, with the erection process taking approximately six weeks. Testing and commissioning of the cranes will run into June.

All of the ARP employees will shadow pertinent departments at Garden City Terminal, which Barrell said builds on the strength of his team.

“We’re excited for this opportunity to extend GPA’s rail advantage into a multi-state region and prepare for the next wave of growth,” Barrell said.