As I reflected on 2017, I thought it might be hard to come up with enough images for a year-end photo blog. Then, I began to sift through my photos and realized just how many wonderful people I got to know, how many beautiful visuals I got to see, and how much fun I had this year.

When our Port Police team asked me to take part in an emergency preparedness Vigilant Guard exercise that included a helicopter ride, my answer was a quick yes. The program simulated a large-scale natural disaster, with National Guard forces interacting with local, state and federal agencies to prepare a response. The GPA coordinated and participated in several scenarios, including a fly-over of Garden City terminal, Ocean Terminal and the facilities in Brunswick. One of my favorite memories was the patient pilot telling all of us newbies, while tugging on his shirt’s neckline to demonstrate, that if we had to throw up we needed to do it in our shirts, or our neighbors were not going to be happy campers. Thankfully we made it through the flight without having to put that bit of knowledge to use. The COSCO Development, in the background here, was the first 13,000-TEU vessel to call the East Coast. This photo of dozens of GPA employees who are also Georgia Southern University alumni was taken on the morning of an event that featured Georgia Gov. Nathan Deal. When I sat down to look at the photos, I was enamored with this group shot because it included so many different GPA departments. It was a historic occasion for GPA, and this photo was a unique way to capture it. 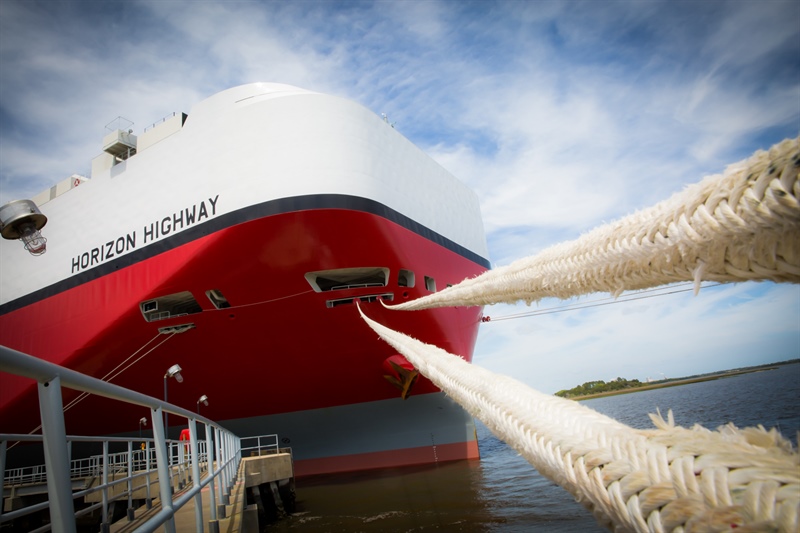 After shooting vessels for the more than five years I’ve been at GPA, I’m always looking for interesting ways to show their size and beauty. I crouched down right at a bollard where this vessel was tied up for this perspective. This K-Line vessel docked at Colonel’s Island Terminal in Brunswick was a beautiful red against the blue sky.

Herschel Walker was one of the keynote speakers at the 2017 Georgia Foreign Trade Conference. Before his animated presentation I only knew about his football career. During his presentation, I learned not only about his incredible discipline, but about his charity work, both of which I deeply respect. 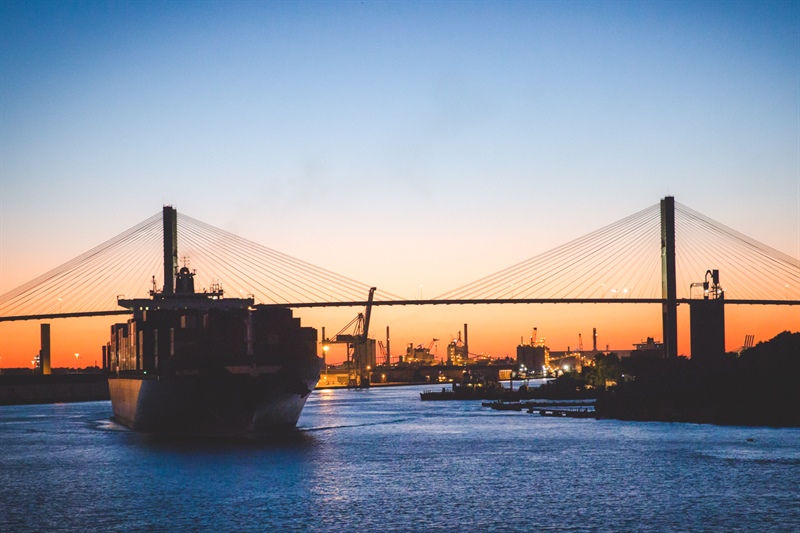 The theme for this year seems to be height. I shot from the top of a ship-to-shore crane, the top of an RTG, and from a helicopter, as well as this shot from a dinner cruise on the Georgia Queen River Boat. Shots like this remind me to take in my surrounds and notice beauty as I go about my daily responsibilities. Some days I’m at my desk for most of the day, but on others I’m giving a tour, or visiting a busy terminal, or in a helicopter. It’s that excitement of my changing duties and the chance to see things and make images that most people can’t, that make me truly love what I do. As the helicopter pilot circled this vessel, I crossed my fingers and hoped that the vibration wasn’t wreaking too much havoc on my focus and that the loop-de-loop we were flying wouldn’t make me queasy. My efforts were rewarded with this image. I’m drawn to this image because of the content. This is an oak grove smack in the middle of GPA’s Garden City Terminal. I helped to organize an event on Arbor Day several years ago when GPA committed to protecting this avenue of oaks that includes trees that are estimated to be more than 370 years old. In 2017, I got to help organize the event pictured when GPA replaced one of the 200+ year old trees that was lost during Hurricane Matthew. As we planted a new tree among the towering historic oaks, it was fun to imagine all this little oak grove has seen and all it will see well into the future. Here the GPA team was working with some of our partners for a simulated emergency hazmat response as part of the larger Vigilant Guard exercise. I love the action in this image, as well as how it illustrates the importance of all of GPA’s partners in making GPA the fastest growing port in the country. This is Ricky McClain. Ricky McClain is a character, one of many who works here at GPA. As part of my work on the employee magazine, I get to meet lots of them. There was no better place to shoot his portrait than near some of the equipment he works on at the tippy top of a rubber-tired gantry crane. Ricky, as an electronic mechanical systems technician, often must climb 75 feet before he can even start his work.

What I love about this series of photos is the innovation. Better Fresh Farms hydroponically grows lettuce in recycled shipping containers. The owner, Grant Anderson, was happy to show us around and explain how it all works. I’ve got a soft spot for farmers, especially the food growing variety and Grant grows some good-looking lettuce! I’ve photographed Governor Nathan Deal several times at port related events, including this one from the 2017 Georgia Foreign Trade Conference. It was encouraging to hear Gov. Deal talk about Georgia being named the number one state for business again and all the economic development efforts that make that possible. What I remember most about this photo of the OOCL France was not that at 13,208 TEU’s it was the largest vessel to call the Port of Savannah at the time, but the gaggle of interns who accompanied me, wide-eyed and excited to capture its arrival. First, we headed down to catch the vessel passing River Street, and then we took the 3-person elevator and white-knuckle climbed 15 stories to the boom of a ship-to-shore crane to shoot it docking. It was a beautiful day to be ship chasing and the interns’ excitement reminded me just how lucky I am to do what I do.