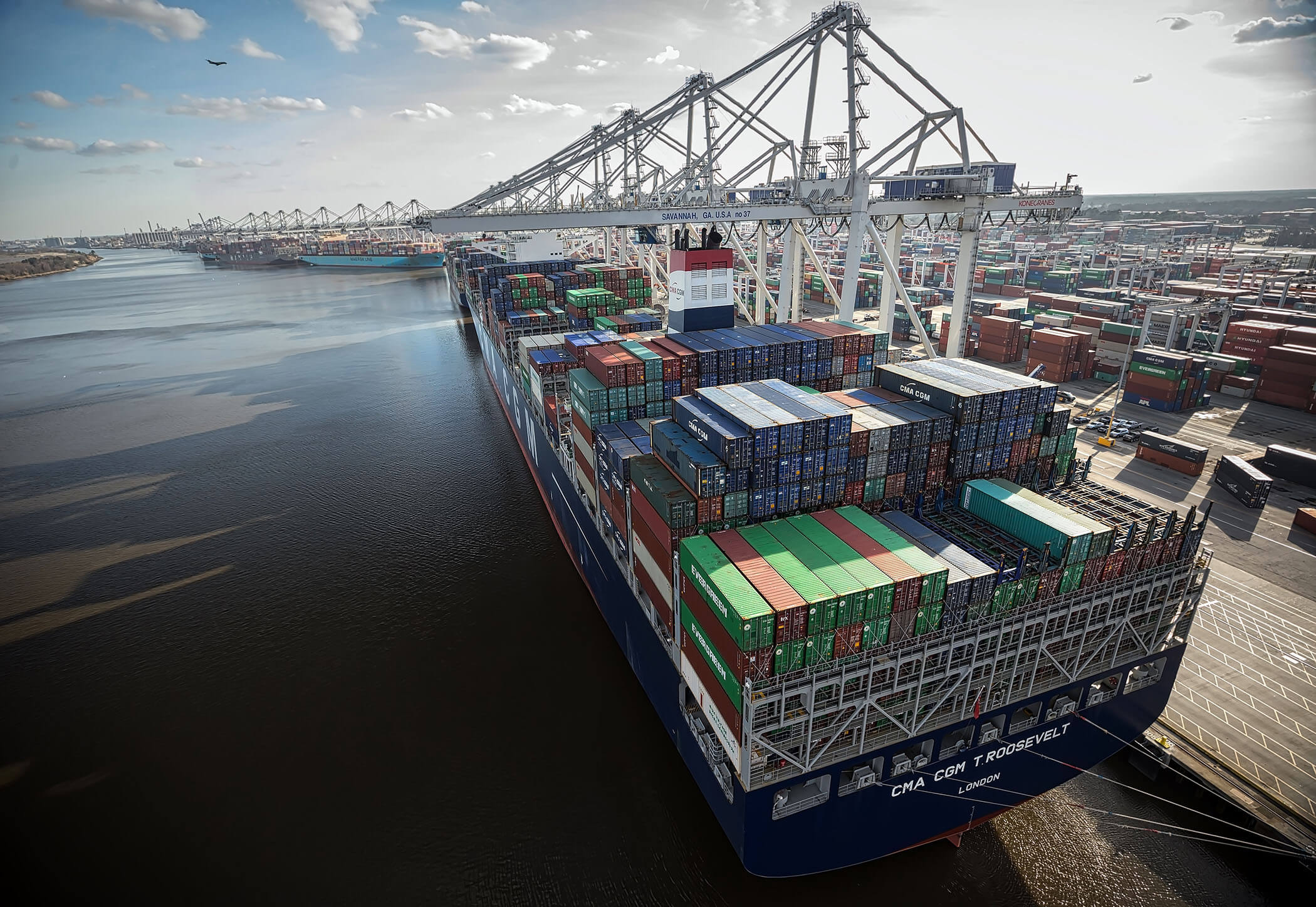 By 2024, the Port of Savannah's Garden City Terminal will feature 37 cranes and the ability to serve six 14,000-TEU vessels at a time. Find print quality images here. (Georgia Ports Authority / Stephen B. Morton)

“No other single container terminal in North America has the ability to expand berth capacity at this rate,” said Lynch. Currently, Savannah’s Garden City Terminal is equipped to handle two of these vessels and by April of this year that number will increase to three.

During his presentation titled “2019: The Triple Crown?” Lynch told an audience of 350 logistics professionals that the Port of Savannah had just last week achieved the busiest month ever in its history, moving 433,975 TEUs, a whopping 28 percent jump over the previous year.

“A strong global economy coupled with a growing awareness of Savannah’s logistical advantages are driving sustained growth at our deepwater container terminal,” GPA Board Chairman Jimmy Allgood said. “GPA’s Big Berth/Big Ship program will ensure Georgia stays ahead of demand and ahead of the competition.”

Over the next five years, the Authority plans to add another 21 Neo-Panamax ship-to-shore cranes, replacing 14 of its older models to bring the total fleet to 37. Dock upgrades are already under way to support the new, larger machines.

“The Savannah market outpaces its peer group for warehouse demand. One of Savannah’s strong suits is that within a 30-mile radius from Gate 4 there is still a real deep inventory of industrial sites and parks that have very effective access to and from Garden City Terminal,” said Blaine Kelley, senior vice president in the global supply chain practice of industrial real estate firm CBRE. “Not surprisingly, it really all starts with the ports infrastructure, the access to global markets, the capacity for long-term growth, and the proximity to the immediate and regional customer base.”

Kelley took part on a GFTC panel titled, “What Are the Key Challenges to Site Selection Today?”, along with Chris Schwinden, vice president of Site Selection Group and Alan Erera, professor of Supply Chain Engineering at the Georgia Institute of Technology.

Allgood added that regardless of the volumes the ports handle month to month, the Authority remains true to its plan to have the long-term interests of customers in mind. “Our beacon is our customers’ needs,” Allgood said. “As long as we always keep that first, we’re going to do well.”

In addition to the ship-to-shore cranes GPA is adding, a dozen new rubber-tired gantry cranes will bring the number Garden City Terminal’s container handling cranes to 158. Ten RTGs will be commissioned in July, another two in September. Phase I of the Mason Mega Rail project will be complete in October 2019. Full completion a year later will double the Port of Savannah’s rail lift capacity to 1 million containers per year. In late 2021, the Savannah Harbor Expansion Project is slated for completion, delivering the deeper water necessary to better accommodate the larger vessels now calling on the U.S. East Coast.

“These advancements are necessary to handle tremendous customer demand at our terminals,” Lynch said.

Schwinden said GPA’s continuous investment aids economic development in Georgia. “The most competitive states and communities are making strategic, proactive investments in transportation infrastructure to ensure they can stay ahead of ever-accelerating corporate and consumer demand,” said Schwinden, who specializes in industrial location and economic development. “In Site Selection Group’s view, Georgia is one of those competitive states that is making those critical investments in transportation infrastructure.”