Counting his blessings prompted GPA employee to give back 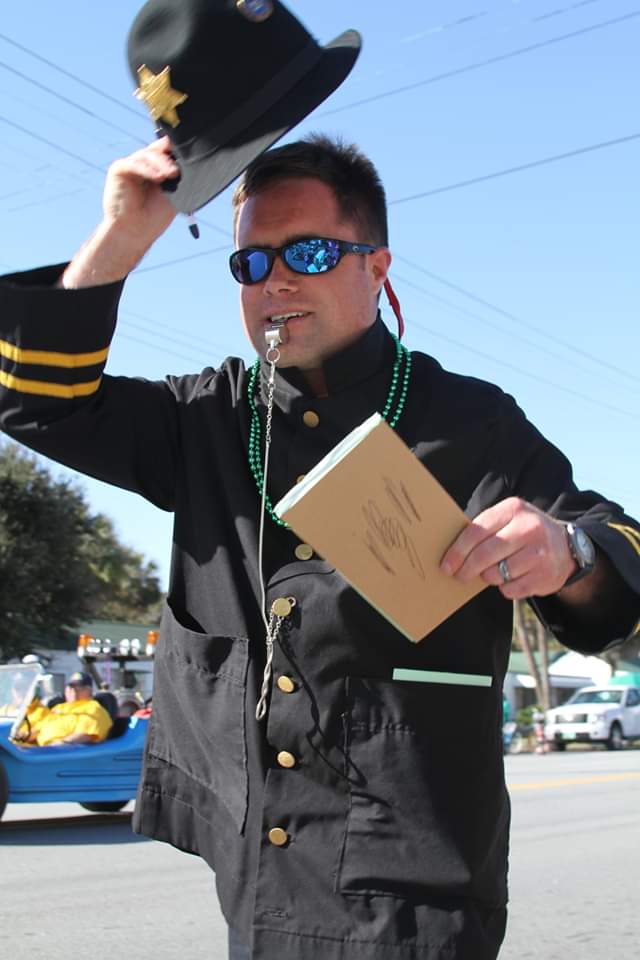 Many Savannah St. Patrick’s Day Parade attendees may not recognize Keith Lynes without his old-fashioned police uniform and ticket book.

Lynes, who joined the Shriners in late 2009, is also a member of Solomon’s Lodge — the oldest continuously operating English constituted lodge of freemasons in the Western Hemisphere. Keith Lynes tickets parade-goers at the Savannah St. Patrick’s Day Parade. He said it’s a fun way to raise funds for the group.

Lynes said counting his blessings prompted him to join the Shriners and give back to the community.

He recalls hearing about a young boy who went into a closet and struck a match, not realizing a plastic garment bag was hanging above him. The child suffered serious burns over much of his body. The child’s parents did not have adequate insurance, but the attending physician was a Shriner and called for assistance. That night, the family was on their way to a Shriners children’s hospital at no cost.

“I remember looking at my newborn son lying in his crib and thinking about how lucky I was to have been blessed with a perfect baby,” Lynes said. “I was really moved to do something.”

Shriners Hospitals for Children is a network of 22 non-profit medical facilities across North America. Children with orthopedic conditions, burns, spinal cord injuries, and cleft lips and palates are eligible for care. Patients receive services in a family-centered environment, regardless of their ability to pay.

In addition to collecting overall dues from its members, Alee Temple raises funds throughout the year for its philanthropic efforts. Annual fundraisers include selling smoked turkeys on the Friday before Christmas and writing tickets during parades.

Lynes and his fellow Kops monitor the crowd for infraction opportunities such as “Lookin’ Guilty” and unauthorized use of camera. The Kops then hand out mock citations that ask the perpetrator to pay a fine of more than $1.

He added that the unit sees many out-of-town checks during the parade, with many going above and beyond to support the Shriners’ efforts.

In addition to its hospitals, the organization is notified of needs in the community. Lynes said some Alee Temple members own a prosthetic practice. While being fitted for a prosthetic limb, one young woman expressed an interested in riding on a St. Patrick’s Day parade float. When they learned the woman didn’t have a dress for the occasion, members stepped up to help.

The temple also recently assisted Memorial Hospital in the purchase of a custom-built ambulance for its NICU department. Keith Lynes said counting his blessings including his wife, Christy, and their sons, Grady and Hudson, prompted him to give back to the community.

Lynes’ two sons, Grady, 9, and Hudson, 6, are still too young to fully understand the reason that their dad attends weekly meetings and dons vintage police attire. However, he hopes his example will compel them to volunteer in a similar capacity in the future.

In his spare time, Lynes also volunteers with his son’s Boy Scout pack, Troop No. 26, on Wilmington Island.

Lynes said the Shriners philanthropy isn’t widely broadcast but is something in which he strongly believes. He served as president of the group last year and has acted as treasurer for most of his membership time.

Even when his previous job took him overseas to England, Lynes made sure to keep his dues current because he knew he would return and didn’t want his membership to lapse.

“I’ve just been really blessed,” Lynes said. “I married an awesome woman and have been blessed with two beautiful boys.”