Looking back at 2018’s year in pictures, many of the photos I think stood out were shot much earlier in the year than when we normally start. And I think that turned out to be a great benefit.

Typically, we start planning and shooting photos for Georgia Ports Authority publications in the summer to meet deadlines towards the end of the year. In 2018, we started in February.

One of the reasons for the early start was the need for photos to accompany the story of GPA’s growth during the year.

We benefited from the ambient light on terminal being different in the first quarter of the year than mid-year or at the end of the year. At the beginning of the year — in January and February — the sun sets three hours earlier and hangs low in the sky and lengthens what photographers call “The Golden Hour.”  This simple shift in scheduling allowed me to work longer with the best light and create new angles during the busiest hours at the port.

Here are 10 of my favorite photographs from 2018. With each image, I included a brief synopsis on how I envisioned these photos, and how they were captured.

A cargo vessel in front of Savannah’s storied river front has been captured in historic photographs since the Port of Savannah became an important port for this nation more than 100 years ago.

With the container ships getting larger, I wanted to show a perspective on the sheer enormousness of the ships that are calling on the Port of Savannah.

A ship loaded with containers passing River Street with Savannah’s City Hall peeking through the stacks of multi-color boxes is just one example. This angle — across the river on Hutchinson Island — provided the unique perspective on the size of the ships against the backdrop of one of Savannah’s most recognizable skyline along historic River Street.

Evergreen container, the bow of ship and seagulls:

A few photos stand out that directly benefited from the shift in sunset as I started shooting.  In the summer, International Longshoremen’s Association workers change shifts shortly before sunset. So, of course, photos with lots of activity during the Golden Hour is limited.

But, in the beginning of the year, the sun is at its best while work is busiest on the terminal.

That timing allowed me to make pictures such as the sun peeking under an Evergreen container while it was lifted off a jockey truck. The soft light falling on the bow of a ship. Or a flock of seagulls taking flight with the lights of a working container ship in the background. The fading light allowed me to use a shallow depth of field to isolate the birds and blur the background.

A funny sidebar: I had to run up to that flock of birds, waving my hands and shouting to get them to fly. I must have looked like a crazy man to anyone who witnessed me trying to get those cold birds to fly. The first one happened as I set up my tripod just after sunset to photograph a group of RTGs moving from one container stack to another. To my surprise, one stopped half-way and started to turn 180-degrees between stacks. I have seen this before, but never at night. Because it was dark, I was able to capture the movement during a 60 second time exposure. Once again, the shorter days in February made it possible to capture the beauty of light and movement on the Port of Savannah. Next, I was inspired to shoot more long exposures. Such as the square photo of the lights of a RTG moving down a stack of container. If the equipment wasn’t moving, I created movement in-camera during a long exposure by zooming my lens into the subject (such as the RTG with the American Flag painted on it). The long exposure allowed me to streak the lights of the RTG. I zoomed in during some exposures and out in others. Some had jockey trucks driving past. This one turned out best.

In the last three images, my aim was to show the size and scale of work at the Georgia Ports Authority.The crew members in orange jumpsuits on the container ship, ONE Stork, are dwarfed by the enormous rudder at the stern of the ship during her maiden trip upriver. Nothing shows size and scale more than KaMin mining operations enormous earth moving equipment extracting kaolin clay out of an open mine in Wrens, Ga. The kaolin clay deposit is a relatively thin layer of white clay that KaMin ships in containers out of the Port of Savannah. Kaolin is used in paper and other products as a whitening ingredient. And lastly, the Roll-on/Roll-off vessel, Morning Carol, sails under the Sydney Lanier bridge at the Port of Brunswick's Colonel’s Island Terminal just before sunset. The 656-foot length of the vessel is longer than either of the 467-foot high concrete towers that hold the 1,250-foot center span of the bridge. 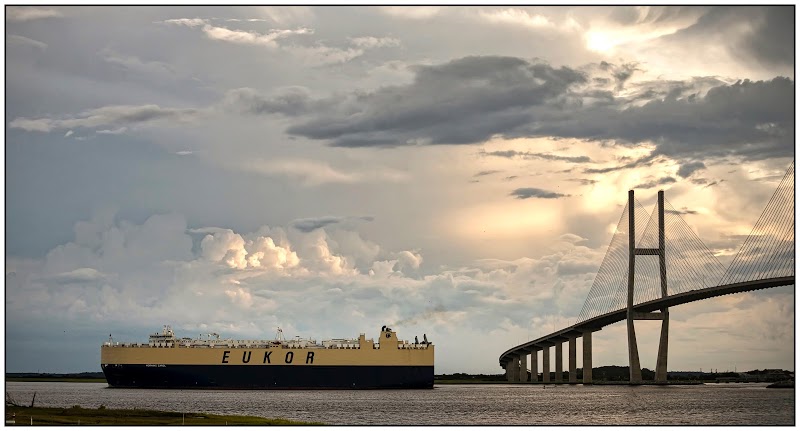 So, in retrospect, even though the days are shorter in the first quarter of the year, the light is better and lasts longer than later in the year. Granted it’s cold and windy, but what’s a little discomfort when a great photo is on the line?